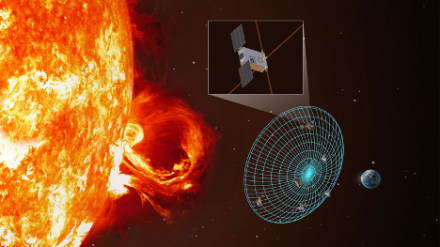 The Sun Radio Interferometer Space Experiment, or SunRISE, is a planned formation of six 6U CubeSats whose objective is to serve as a space-based low radio frequency array. They will observe the solar environment, creating a 3D map that will determine where large particle emissions come from on the Sun and how they evolve as they expand outward. The mission will also work to map the pattern of magnetic field lines from the Sun that reach into interplanetary space.

The propulsion system design builds on SSDL’s previously cold-gas systems, utilizing additive manufacturing to print a single structure that combines propellant tank, fluid paths, and nozzles. This enables the design of complex and custom structures that would not be possible through traditional manufacturing approaches, limiting the possible sources of leak and failure through a reduced number of interfaces, and allowing for more efficient utilization of volume and mass within the system. The SunRISE propulsion systems use a non-toxic, commercial refrigerant as a propellant to provide high specific impulse. This propellant has also been used in SSDL’s previous cold-gas systems.