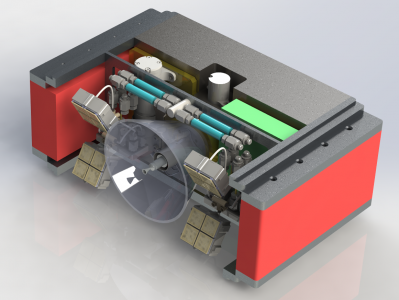 The advancement of propulsion systems for small spacecraft in recent years have allowed this class of vehicles to evolve from relatively simple Earth orbiting platforms to interplanetary spacecraft with ambitious yet achievable scientific goals. Chemical and electrical propulsion systems have been the enabling technologies for small spacecraft. A system with both propulsion technologies is attractive since it allows for high thrust and high efficiency maneuvers. Traditionally, these systems have used different propellants, requiring integrated systems to have complex multiple propellant tanks. However, the recent development and maturation of the AF-M315E (ASCENT) green monopropellant technology has made it possible to integrate these systems using a single propellant supply tank.

Georgia Tech is leading the design and systems integration efforts for a bimodal propulsion system, referred to as Spectre. This system will make use of chemical thrusters to provide relatively higher thrust in the 100mN range and electrospray propulsion for lower thrust but more propulsively efficient maneuvers. This baseline design can be upgraded to provide thrust levels up to 10N by utilizing larger thruster modules. Chemical thruster development is being done by Plasma Processes, LLC, while an electrospray system is being developed by MIT’s Space Propulsion Lab.