Georgia Tech’s SSDL is participating in a multi-university CubeSat formation flying mission to image the sun in unprecedented high resolution, revealing energy release sites in the solar corona that are believe to be the source of coronal heating. 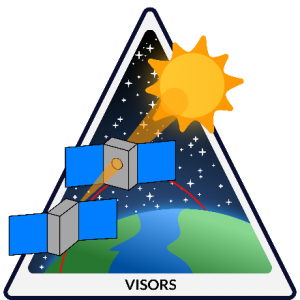 Comprised of two 6U cube satellites (CubeSats), the VISORS formation will image the solar corona at the resolution required to determine the existence of hypothesized heat-release bands that may explain why the corona exhibit unexpectedly large temperatures. By separating the telescope components across two spacecraft, the VISORS formation avoids the scaling problem which limits conventional coronal imagers and gathers high-quality imagery at a fraction of the cost.

The optics spacecraft (OSC) hosts the optics system of the telescope and serves as a sunshade to prevent unwanted solar radiation from entering the detector, which is hosted on the detector spacecraft (DSC). When aligned to collect imagery, the OSC and DSC form a sun-pointed distributed telescope and gather observations. This alignment occurs once per orbit when the CubeSats are in the science formation: a relative orbit in which the inter-spacecraft separation is approximately 40 m. After completing a set of observations, the formation will autonomously maneuver into an increased-separation standby formation for maintenance operations and data downlink. When an uplinked command is received, the formation will transfer into science formation and attempt a new set of observations.

Fig. 1 a) Two 6U satellite formation when in alignment to collect coronal imagery b) VISORS concept of operations diagram.

The distributed telescope provides the required angular resolution to image the hypothesized energy release sites, but its sensitivity enforces strict requirements on the relative position and velocity errors when in alignment, as shown in Fig. 2. The OSC deviation from the DSC in the lateral direction is restricted to be within 18 mm, and the OSC cannot shift in the longitudinal direction past 15 mm to maintain the nominal focal length. Furthermore, the relative spacecraft lateral drift must be below 200 μm/s to prevent image blur.

As highlighted in the concept of operations, collecting coronal imagery flows into requirements for autonomous maneuver planning. For the CubeSats to plan maneuvers and achieve the required relative state accuracies, the spacecraft must communicate with each other. This leads to the development for an inter-satellite communication link. Furthermore, each spacecraft must contain an onboard propellant system to perform the maneuver burns. The VISORS mission team aims to develop these novel technologies in relative guidance, navigation, and control, inter-satellite communication, and CubeSat propulsion to achieve the mission objectives.

Georgia Tech is serving in multiple roles on this project. As the systems engineering lead, SSDL is coordinating efforts across nine universities, one NASA facility, and one laboratory across each aspect of the spacecrafts’ design. This includes requirements formulation, validation and verification, system-level analyses and trade studies, concept of operations design, risk mitigation, and more. This will culminate in the integration of each spacecraft at SSDL’s Flight Hardware Laboratory. As the propulsion lead, SSDL is developing 3D-printed cold-gas thrusters to enable maneuvering for each spacecraft and ensure that the tight relative control requirements can be met. This multi-disciplinary project requires knowledge of all aspects of spacecraft design, allowing students to work with others throughout the space industry, gaining expertise and depth.