Dr. Brian Gunter's research group, along with a GTRI team led by Dr. Chris Valenta, have worked together to design and assemble the Orbital Calibration ("OrCa") 12U CubeSat. The spacecraft launched aboard a ULA Atlas V rocket on March 26th and was successfully deployed into a Geosynchronous Transfer Orbit (GTO). The recording of the launch webcast can be found here.

The simplistic and ingenious design hides a deliberate and complex approach to the mission. The spacecraft is intended to be tracked by ground-based telescopes in an effort to improve existing models for space situational awareness. The different reflective surfaces were characterized beforehand and will be compared to the telescope observations to identify discrepancies in existing models.

The satellite itself was built and tested in just over six weeks. A remarkable feat for any satellite manufacturer. More information regarding the mission and the team's involved can be found here. 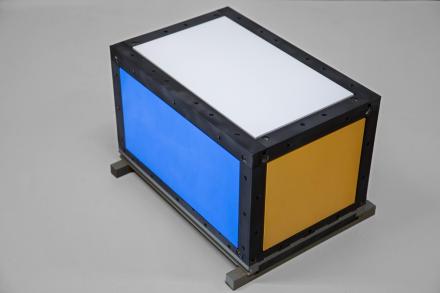